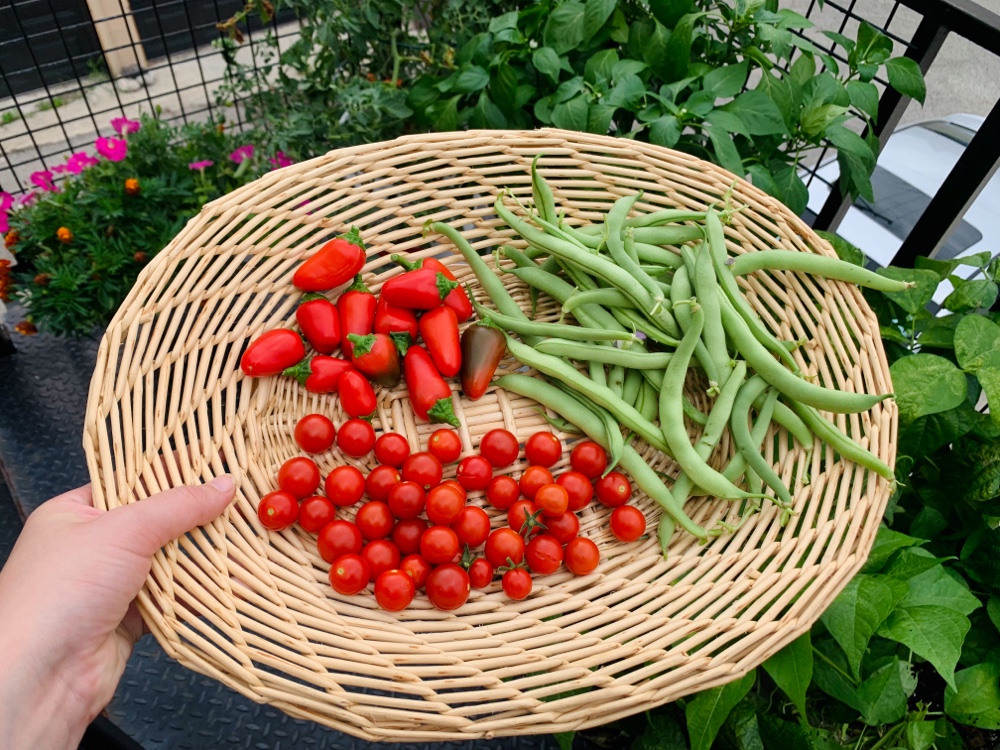 This year, I set a goal to be more thoughtful about what I planted in my container garden. For me, this meant planting produce that I could pick through the entire growing season, and choosing vegetables we were more likely to eat.

I wanted to increase the yield of my little garden, but avoid being wasteful.

So far, I’m happy to report that I am rocking my goal.

The garden itself didn’t really start to produce edible fruit until the beginning of July. In June, I had a handful of green beans and a single cherry tomato that I picked.

This was a bit discouraging since I planted everything in mid-April this year, about a week or two earlier than I normally plant. I thought my garden would be in full swing by mid to late June, but alas, we still had to wait until July for things to really get going. 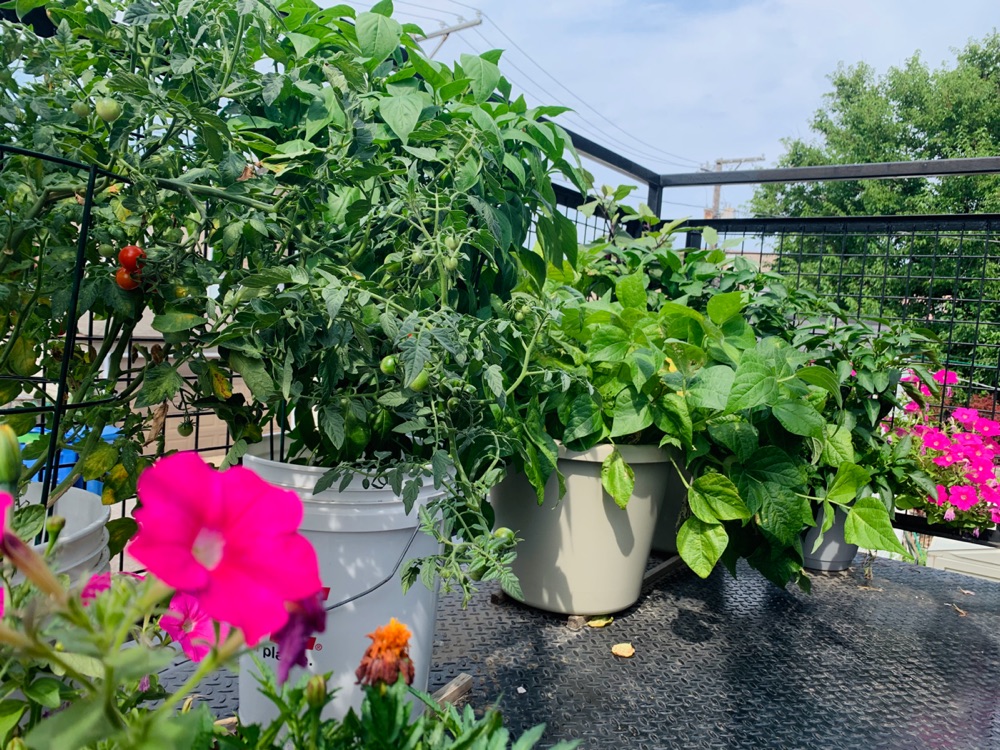 I’m very pleased with all the varieties I chose this year as part of my “thoughtful” container garden. The cherry tomatoes I knew would be a good choice. But I had less faith in the mini eggplants, bush beans, and sweet peppers. Luckily, they’re producing really well, and we’re eating them!

First, I’d like to give a shout out to the “mini” eggplants, which are much bigger than I expected. This plant is packed in between a sweet pepper and a poblano plant, all in the same 17in pot. Despite this, the plant is thriving. 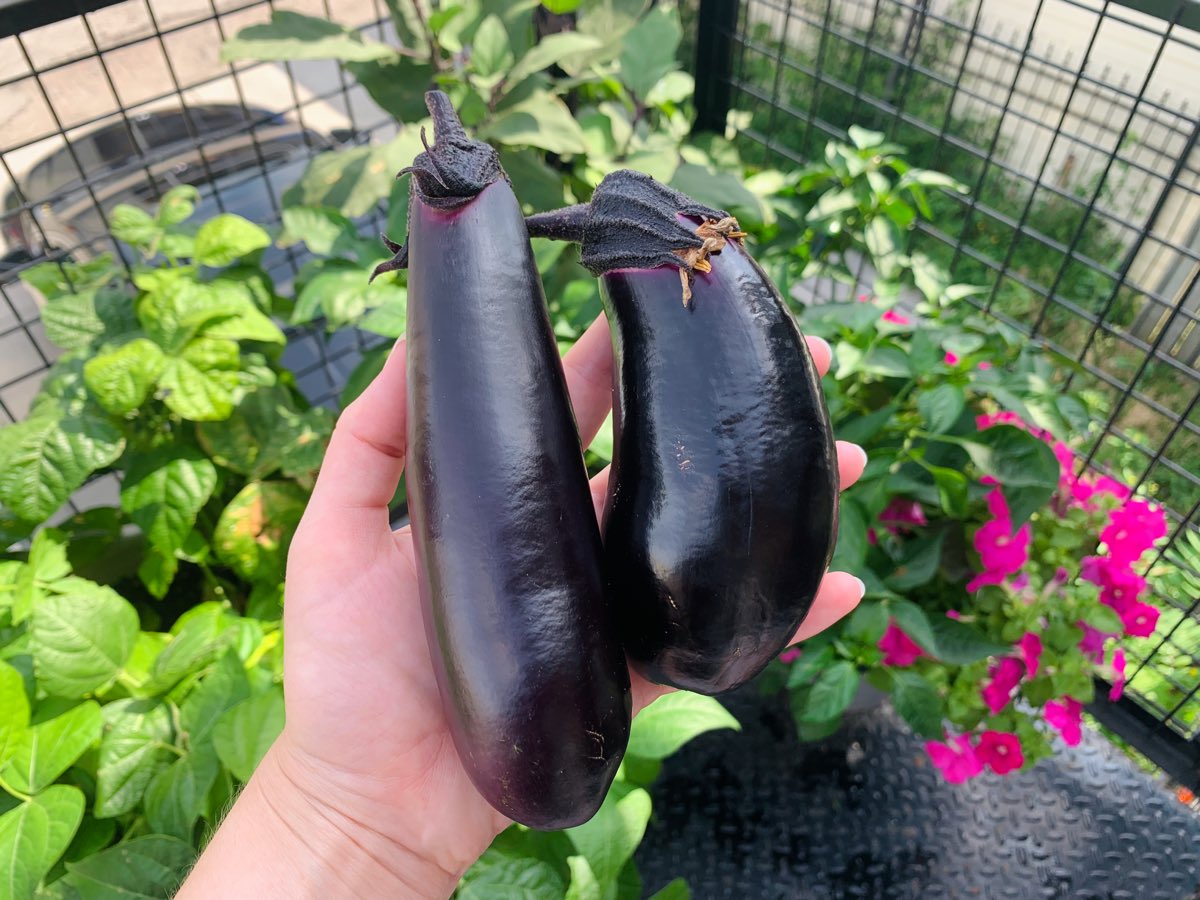 It also produces a lot more fruit than I expected! About 5 - 6 eggplants are growing off of it at any given time, and they ripen in about 3 weeks time. On top of this, the plant is always putting out new flowers.

The flowers are super pretty too. It’s actually a gorgeous plant to admire.

The only problem I’ve had with the eggplants is some of them don’t get that dark, glossy shine when they’re ready to be picked. I had a few that stayed dull, with hints of green. After a few weeks I decided to pick them so the plant could focus on producing more fruit.

When I opened them up to see what was going on, they were fine! So, not sure what’s up with that. My hunch is that the fruit gets dark and glossy when it comes in contact with the sun. Since these particular eggplants were hidden under the plant’s leaves, they didn’t fully ripen.

My second biggest producer are my bush beans. I packed four bush beans into a 17in pot. I’m glad I did four plants and not three. The amount of beans these plants are producing are the perfect amount for me and my partner. 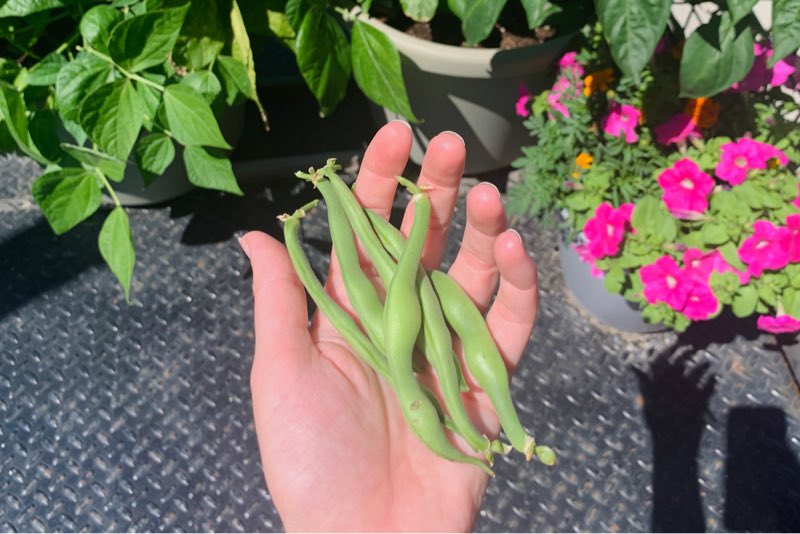 You may ask, why bush beans instead of pole beans? Given you have little space, wouldn’t growing them vertically make more sense?

Well, yes, it would. And now that the plants have matured, they’re falling out of their pot and taking up a lot of walk way space!

Truth be told, I bought these beans as an impulse purchase while walking through Ace Hardware. They were barely over a dollar and I like a deal! I’ve tried pole beans before and they died after producing two or three leaves. So on a whim and a prayer I decided to try bush beans, and I’m really glad I did!

My sweet peppers are the other big winner for my high yield, low waste patio garden. They’re delicious and producing very well! Well, one of them is at least. 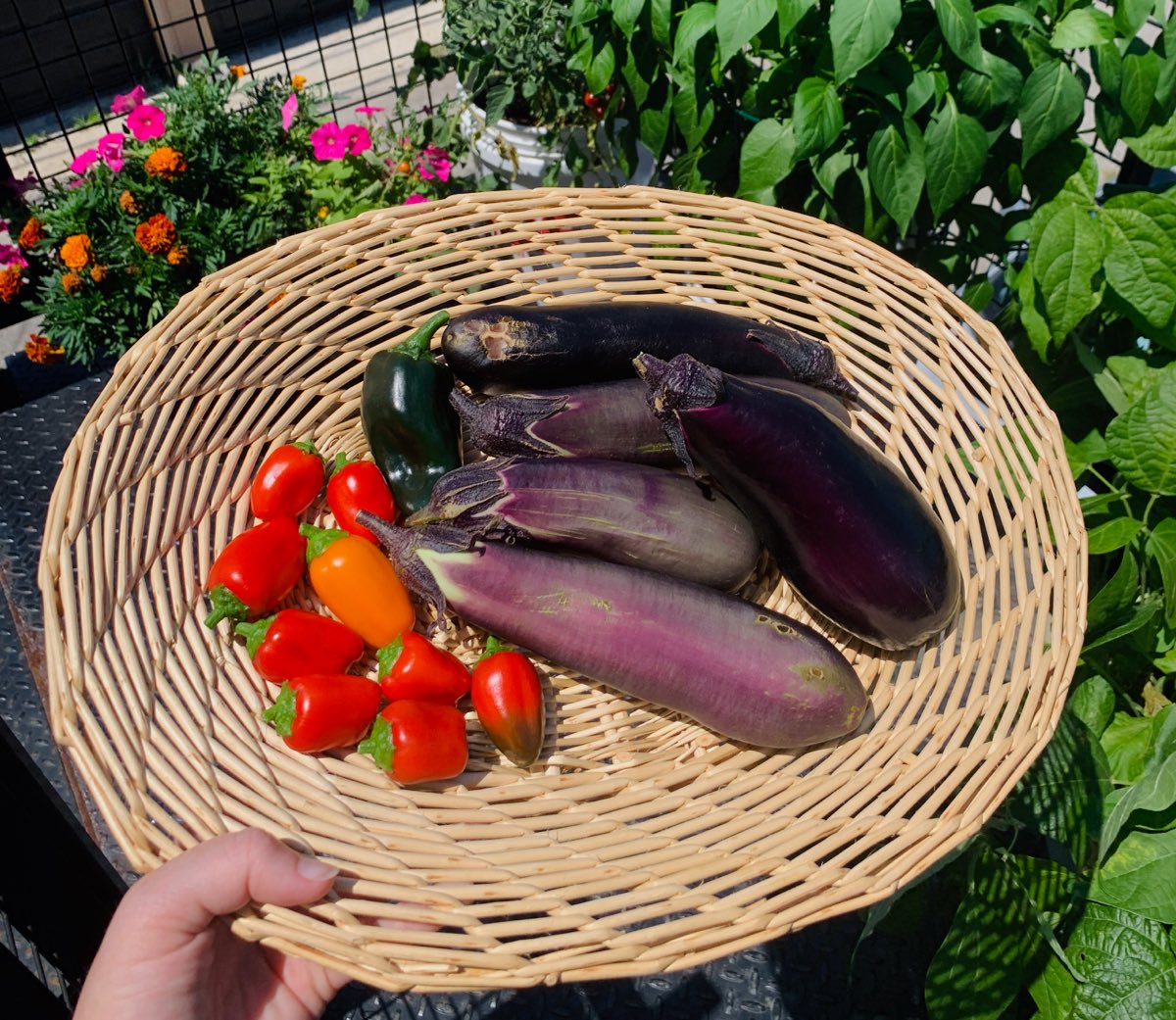 The red sweet peppers are doing great. My orange ones, tucked in with the eggplant and poblano plant, are producing peppers but ripening at a much slower rate. They also sit next to the ever exploding bush beans.

My theory is the orange peppers aren’t getting a lot of direct sunlight on their fruit, which is delaying the ripening process. They might also just be too cramped and lack nutrients.

The only vegetable I’m really not so sure about currently are the poblano peppers. It has tons of peppers on it, but they’re growing quite slow, and none of them seem to have fully matured yet. I can’t help but suspect this guy is also a bit cramped and in need of more space.

Sometime in May, I also decided to plant cucumbers with seeds I had left over from the previous year. I’ve had problems with pollination on the upper part of our deck where I keep them, so I figured it wouldn’t hurt to get some flowers this year. I got marigolds and petunias, and so far, no pollination problems.

And last but not least, I want to share my favorite part of the garden this year: my Meyer lemon tree! 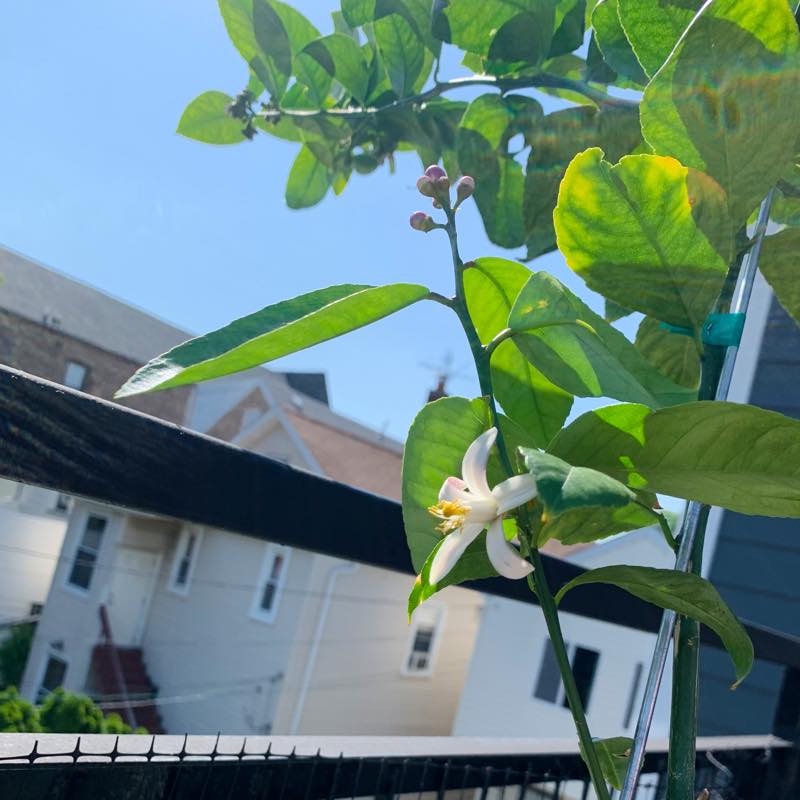 This was a gift from my partner in April. I have always wanted a Meyer lemon, or any citrus tree to be honest. Getting one was a dream come true!

That said, I know nothing about citrus trees. This little guy is going to face a lot of trial and error probably. But it’s flowered twice now, and I have about 5 - 6 little lemons that are an inch wide. I’m dying to see how they turn out!

The Top 3 Grow Bags for Any Vegetable in Your Garden read more
In the Mail: Why are My Hatch Peppers so Small? read more
The Top 5 Disadvantages of Using Grow Bags read more
Gardening in Utah - What to Plant in Spring & Fall read more